A group of fourteen walkers, and one very excited dog, met at Ribblehead viaduct to catch the train to Dent station. There was just enough time aboard the train for several members to take advantage of the facilities on the train, but only just, as SH found out, much to the amusement of the rest of the party!

The group joined the Dales Way path towards Dent and then continued along the Craven Way, back over towards Ribblehead, including an ascent of Whernside via Knoutberry Hill.

The weather was unseasonably mild and dry and the autumn colours were stunning, but the view from the top of Whernside was obscured by the mist. 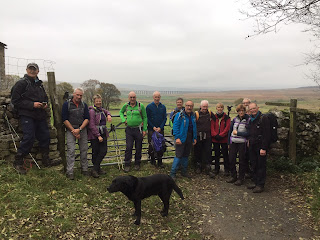 An excellent days walking concluded at the Station Inn for rehydration! Many thanks Chris and Rob for a great day.