As the customary rains pour down now the school summer holidays have started, it’s a good time to report on the season so far.
On July 9th George suggested an interesting and excellent new venue, South Crag at Castle Rock of Triermain in the Lakes but due to many absences, Linda was the only member to make the trek north to climb with George. Nevertheless, a good day was had and it proved to be a good choice with plenty of amenable trad climbs on dry, clean and solid rock – a place we can sample again in the future.
Midweek sessions have recently been a bit fragmented due to poor weather and absences but Woodcutters Buttress at Giggleswick North on Thursday 20th July was very successful with eight climbers turning out and blitzing the mini-classics there.
The climbing last week should have been trad for a change but the weather forecast was very poor and we expected to be at Ingleton Wall sheltering from the frequent heavy showers that seem to be sweeping in at the moment. So on the evening of Thursday 27th, when the skies cleared and the sun came out, we could hardly believe our luck to be climbing route after route on perfectly dry rock at Stone Cold Buttress, Giggleswick South. 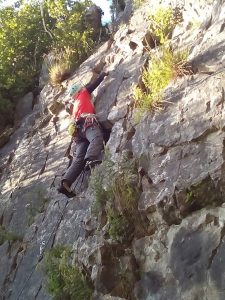 Linda (pictured above) teamed up with Sam and tackled a number of nice little routes, some of which proved tougher than expected. There has been some new route activity here since the Rockfax guide of 2015 and it can be confusing matching a particular line of bolts with the lines on the topo. UKC website is useful for updating the guidebook as new routes get listed here first alongside all the existing routes in Rockfax. 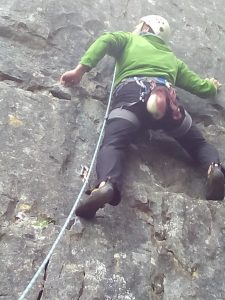 Andy, Bern and myself teamed up and climbed Saving the Day F6a, Under Pressure F6a+, Bella Calcio 6b and Stone Cold Crazy 6c which mostly proved to be tough for their respective grades, probably due to their modest height of only 10 metres – short but intense!
Finally, a quick mention of somewhere down south – the Isle of Portland on the Dorset coast where Chris and I have spent some time this summer. This is a rock climbing paradise with miles of bolted limestone on cliffs perched above the beautiful English Channel. It’s a place where incredible things happen like buildings balancing on the roofs of other buildings, where you can stumble across pieces of limestone bearing the imprint of ancient waves on a Jurassic beach and where lady chairmen of the CMC lead 7a for the first time in their early 60s!! 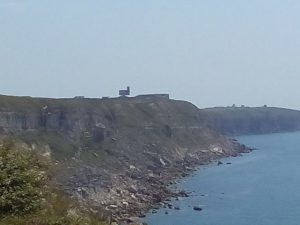 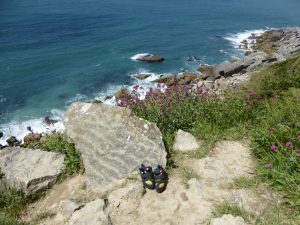 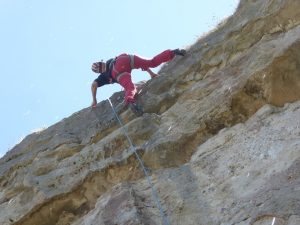 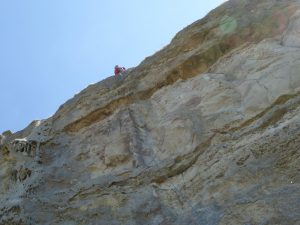