Time for another blog, time to report on our recent activities. The club proper continues to meet up for climbing every Wednesday or Thursday evening, usually at Preston wall but I sense a change in the air . . . ! Sooner or later we will try out a different venue, current favourite being Warrington wall as it’s only a short hop down well-lit motorways and perhaps not too far to go straight after work. It’s also an excellent wall with quality climbing and bouldering inside a disused church on the right side of the town centre for us (north).
On Sunday November 13th a small group led by Linda and Peter had a great day at the Crow Chin sector of Stanage Edge in Derbyshire, a smart tactical move as the original plan to go to Trowbarrow in the south Lakes looked doubtful from the forecast. 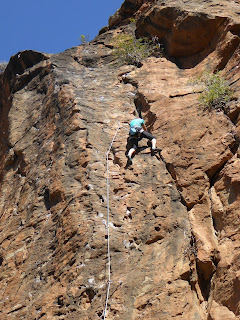 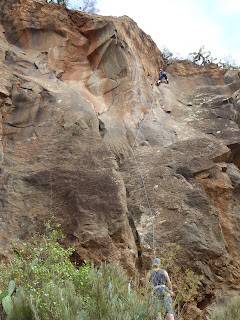 Sorry no pics for Stanage so these will have to do instead. Chris and I and Bern and Jane went to Tenerife for the middle 2 weeks of November where the highlight was undoubtedly snorkelling with a huge green turtle only 10 metres offshore at Callao Salvaje where Bern and Jane were staying. Oh and we did some climbing too . . . Too much to report all the highlights but each of us led some of the best and hardest routes of our lives on incredible rock on some of the most dramatic cliffs we have ever set foot on! The pics show Chris leading a big and quite scary 6b at Guaria, Tenerife’s most stunning crag, and nearing the top of a 6c at El Rio (yes, those are giant cactii overhanging the top of the cliff!). This was so nearly the scene of a landmark event in our lifetime of climbing together, as I’d just messed up the crux sequence completely, got pumped and had to admit defeat with another 30 feet of hard climbing still to go to reach the top. Chris decided she might as well have a go, proceeded to go higher than I had done quite comfortably and looked totally in control going for her first onsight lead at this grade! The three guys on the ground (myself included of course!) were shouting encouragement and one of them, Pete Greenwood from Todmorden, was already typing the text to relay back to all his climbing mates in the north of England that Rob Smitton was beaten on a 6c by his wife! I mean it most sincerely, folks, when I report that in those moments as Chris neared the top, I would have gladly endured all the ribbing I’d have got on the climbing wall circuit this winter if she’d succeeded! Sadly, she ran out of strength with only a few feet to go and we were all gutted! It was a brilliant effort nevertheless and she topped out after only a very short rest on the top bolt. 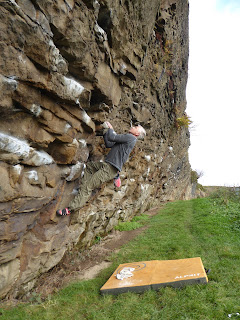 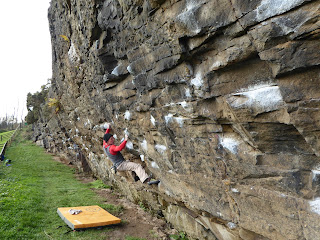 So where do we go from here? There’s always a sense of anticlimax after a good trip and there’s no better place to bring you back to earth with a bump than Craig-y-Longridge, the ridiculously steep bouldering crag near Longridge. Bern and I found it in fairly good nick this morning (25th Nov) with only the minimum of seepage but quickly found the strength we’d aquired in Tenerife was no match for the flatties and slopers that Craig Y is renowned for. We persisted, however, and both came away feeling as though we’d made real progress. There is an old adage in training circles that as preparation for the next outdoor climbing season, you are better coming out of the winter strong than with stamina from doing loads of roped climbing – hence the bouldering. It could just be the way forward!                                                                 Cheers for now                      Rob Smitton