Now the midweek sessions are indoors, it was nice to climb outdoors at Horseshoe on what proved to be a mostly pleasant and sunny Sunday. The pleasures of this former limestone quarry in Stoney Middleton dale have been well-documented over the years: it is the most popular sports climbing venue in The Peak and the grades are widely acknowledged as being on the harsh side. It is also the victim of its own popularity with many of the classic routes becoming polished and feeling insecure due to the bolts on some routes being widely spaced – scary! Nevertheless, all seven of us that turned up had an excellent day with the first-timers vowing to return as soon as possible. Horseshoe is a vast quarry with two tiers and we only had time to scratch the surface of what’s on offer there. The upper tier has some superb routes in a quieter setting which we can perhaps explore next time? 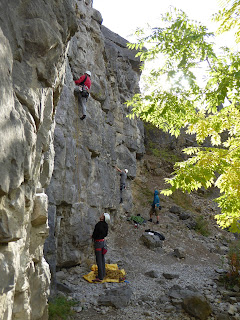 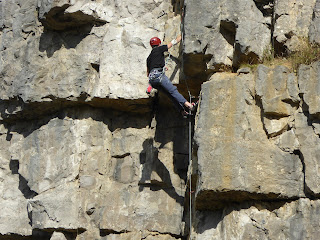 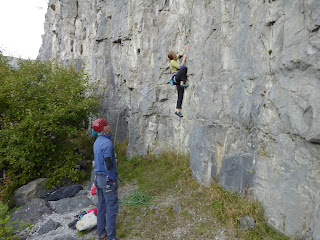 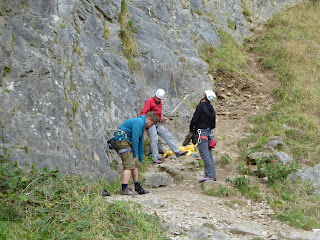 The photos in order show Peter, Mark, Warren and Andrew tackling the Bog area climbs, Bern getting to grips with a steep 6b+, our lady Chairperson tackling a polished 6b horror and Peter, Warren and Mark contemplating the 35 metre slab routes on the back wall of the quarry.
Chips, peas and curry sauce in Glossop on the way home tasted like heaven after the exertions of the day!
Rob Smitton