With Rob and Chris climbing in Spain, Peter skiing in Austria and Warren ice climbing in Scotland, it was left to a small but enthusiastic team of climbers to head off and sample the limestone delights of Woodcutters’ Buttress at Giggleswick North. After a grim forecast, the weather seemed to be holding and the sun temporarily broke through to keep spirits high as Dave, Linda and Bern got the climbing started with a warm-up ascent of Stumpy 5+. Buxy and Andrew tackled Joinery 6a and were later joined by John Saxton on Tong and Groove 6a. The predicted shower arrived late afternoon but not before the group had seen off Debbie Direct 6a+, Ben Hur 6a+, The Craftsman 6b+, Fellsman 6b+ and Softer Touch 6c.
We all left Giggleswick with a real appetite for more adventures on Northern Limestone and with the days starting to lengthen and the clocks going forward in only 3 weeks, the excitement is starting to build and I for one just can’t wait!
The photos in order show Linda and the team, Buxy on Debbie Direct and Dave on Tong and Groove. 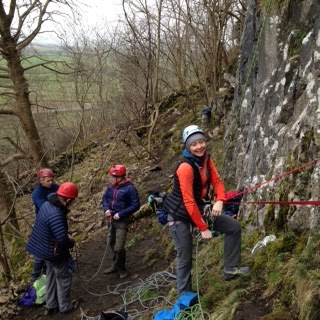 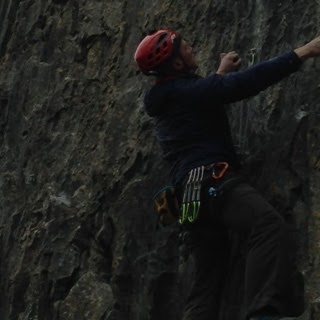 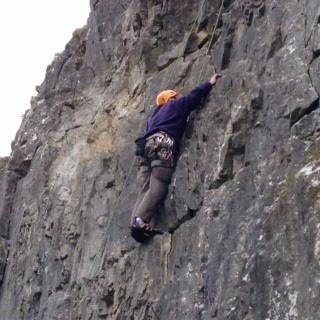