It’s a crag of two halves! Go to the central point and everything to the left is F4 to F6a with its fair share of loose rock in places. Nice routes nevertheless with brilliant views over the old streets and alleys of upper Settle and the countryside beyond. Go to the right and the angle increases alarmingly with routes between F6a+ and F7b. The rock here has been quarried to some extent but has been stabilised by local activists in recent years and the routes are generally very solid as well as incredibly pumpy. 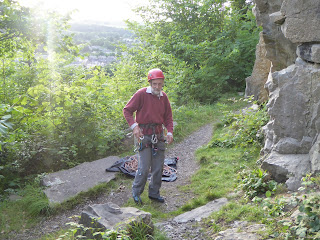 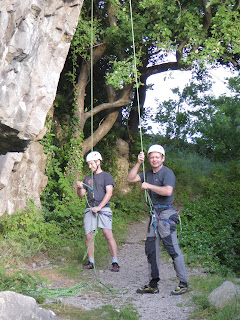 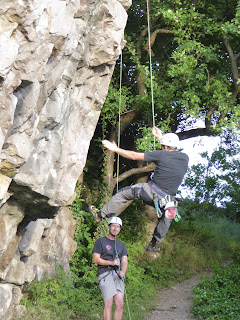 Photos show George psyching himself up for something horribly steep and Andrew and Warren having a swinging time at the right end of the crag. Another very enjoyable gathering with not too many midges to spoil things and we even gate-crashed Quiz Night at the Talbot Arms below the crag at the close of play. A pint after a thirsty night’s work on one of Yorkshire’s steepest little crags – what could be better?