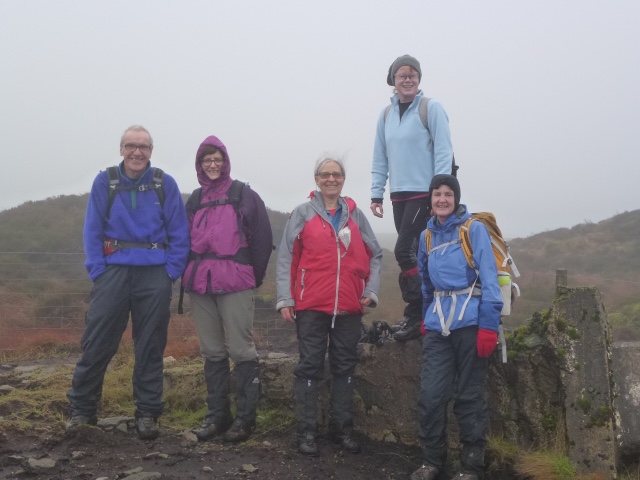 The walk was attended by Alison T, Ian T, Anne H, Godfrey, Sue and Gail. The rain held off but it was misty on the tops and very mild for January. We started from the lay-by at Cam Brow, followed the road a little way and  then up Catshaw Greave to the boundary fence on the tops. The fence was followed to the top of Hawthornthwaite Fell. The trig point has seen better days, and is now laying on its side, but it provided an ideal spot for a short break. The precise top of this fell is difficult to locate (a case of where would you like it to be), due to erosion of the peat. We continued along the top by the fence for half a mile or so until we could descend north east following spaced posts to Black Clough and a suitable spot for lunch. A good track led us back to the road. We followed the road to a public footpath along the river towards Abbeystead then took a permissive path on the south side of Abbeystead reservoir. Lots of sticky mud on boots here. We crossed the river by a weir and continued on the north side of the river to Long Wood and back south towards Catshaw Hall .  Better tracks leading back to the road and our cars were most welcome after all the boggy bits.